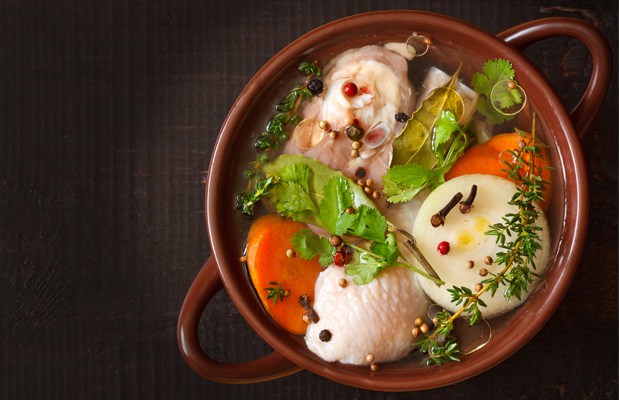 Shaming is a rotten way to sell things.

Well, I take that back. It’s actually a spectacular way to sell things, and it’s a well-proven marketing strategy. Preying on people’s fears and insecurities by reminding them of undesirable physical traits makes diet authors, trainers, bloggers and self-styled gurus rich all the time. But I’ll be damned if I support people who shame others for their physical characteristics in order to promote their commercial products and diet books.

A friend recently sent me a blog post entitled “Ten Reasons to Add Bone Broth to Your Diet”, and I thought, “Oh, cool. This will be a short-and-sweet summary of the health-promoting properties of bone broth.” Well… I thought wrong. What the article was, in fact, a list of claims about bone broth, many of which are overstated or even unfounded (for example, I’ve seen no evidence that bone broth is actually “fat burning”). The whole article was a thinly veiled promotion for the author’s bone broth diet. But it got worse. Much worse.

The author goes on to write that bone broth “doesn’t just erase wrinkles—it helps smooth out that unsightly “cottage cheese” cellulite on your thighs. (Hello, swimsuit!).”

So wait… I should drink bone broth to fix that ugly part of my body so I won’t be so ashamed when other people see me on the beach? (Please don’t miss my sarcasm here.)

I’m disappointed and disgusted by this woman using shame against other women to further her own business plan. Instead of writing about how bone broth is a traditional food that is an excellent part of a nutrient-dense, health-promoting diet, she resorted to implying that it would make you less ugly. Additionally, there’s no evidence that drinking bone broth makes that “cottage cheese” cellulite go away anyway. So it’s shaming and exaggerating.

Let me say this again: it’s not okay to use shame to get people to buy your book or do your program or subscribe to your newsletter. It’s not okay to tell people that wrinkles or cellulite or gray hair is “unsightly.” It’s not okay to sell people books by reminding them of how they don’t live up to society’s messed-up, destructive beauty standards. And it’s not okay to do all of this under the guise of promoting health so that women can “find their inner strength and glow” – which apparently isn’t inner at all and can actually be produced by drinking more bone broth.

In this same article, bone broth is also likened to “Spanx for your face” and the author notes that “when my patients need to lose weight rapidly, I tell them to do mini-fasts, eating nothing but bone broth two days a week.” Once again, there’s a massive distortion going on here: a nutritious traditional food is being repackaged and marketed as a cure for your fat, ugly ills. Need to lose weight really fast? Just stop eating two days a week. Need to cure your ugly body problems? Don’t worry, I have a solution for that, too. Just sign up for my newsletter to find out how… Selling people on nutritious food by reminding them that they have “unsightly” features is a step towards the special place in hell reserved for the likes of Tracy Anderson.

The dishonesty of purportedly promoting health while slyly capitalizing on society’s obsession with body image sits so, so wrong with me. As cofounder of the Whole30 program, I strongly advocated for the adoption of the “no scale” rule because stepping on the scale was a major distraction for participants, often discouraging and distracting people who thought that they had “failed” because they weren’t losing as much weight as another Whole30 participant they’d read about online. My idea was that by discouraging people from focusing on appearance and weight loss during the program, they would then be free to actually learn about their bodies and to incrementally break free from the obsession with how their bodies look. Since then, tens of thousands of people have done the Whole30 without making their appearance (or what the number on the scale is) their primary focus. I count that as a great success.

The crux of this issue is that focusing on changing your appearance will nearly guarantee that you miss out on the life-changing magic that a sound lifestyle plan or a short-term intervention like the Whole30 has to offer. A #nonscalevictory should be complemented by a non-mirror victory and even more importantly, a non-appearance victory. Stepping off the scale and instead stepping in front of the mirror (or camera) isn’t progress. Telling people not to weigh themselves but then promoting weight loss “success stories” is a confusing and inconsistent message.

I’m appealing to influencers and health educators to do better. Stop leveraging people’s fears and insecurities against them so that you can sell more books or get more followers. Stop pandering to people’s obsession with appearance by promoting before-and-after pictures, or by reminding them about their cellulite.

Listen, it’s not wrong to care about how you look. Losing weight can be an indication of your improving health – but it can also be a result of extreme and damaging choices. So instead of fixating on how much you weigh or how you look in a bathing suit, focus on who you are. Because you know what’s really, really beautiful? Kindness. Joy. Self-respect. Generosity. And that’s true even if you don’t drink bone broth.

Edit: the publishers of the referenced blog post have quietly edited the post with no public acknowledgement of the edits.