I Am Not A Guru 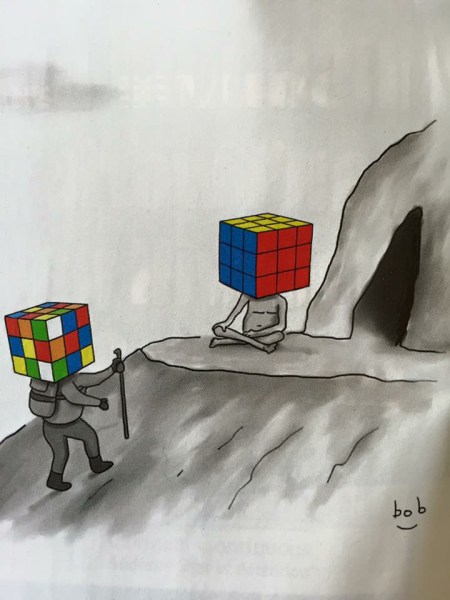 There’s an interesting thing that humans do: we mentally connect things that may or may not be actually connected. In our ancient past, pattern recognition was key to our survival.

If a predator attacked you at dusk a few days ago, there’s a pretty good reason for you to be extra-aware each successive day around dusk. The inverse is also true: if you wandered down by the river and found a ton of delicious, nutritious fruit* there, you’ll probably look more closely at the riverbank next time.

These associations may or may not be valid predictors of future experience. The more experiences we have (i.e. the more data we gather about the world around us), the more we can suss out specific, valid patterns.

However, we still have a predilection for connecting things that are not actually connected.

I guess if I had to choose between seeing patterns that aren’t actually there and not seeing patterns that are there, I’d choose seeing imaginary patterns. I think that’s what humans have chosen en masse, and that has probably been an evolutionary advantage for us as a species. We confuse causation with correlation, and we do tend to create (imagined) connections between things that often aren’t connected, or at least aren’t connected in a direct and causative fashion.

For example, people often ask me for business advice, saying that they’d love to create a program that catches on like wildfire and then to use that platform to create large-scale, positive change in the world by writing and public speaking. And then they ask me to teach them how to do that.

We confuse causation with correlation, and we do tend to create (imagined) connections between things that often aren’t connected.

DO AS I DID? PROBABLY NOT.

The assumption on their part is invariably that since I cofounded the Whole30 program back in 2009, presented it to over 150 audiences worldwide and wrote two New York Times bestsellers about it, that I must have some secret that I could tell them about how to recreate a similar phenomenon.

Well… I don’t. The truth is that the Whole30 program has grown huge and influential beyond my craziest fever dream, and it happened because:

My cofounder and I had a really well-suited, complementary set of professional backgrounds and innate abilities.

My academic and professional background was in anatomy, physiology, rehabilitation medicine, nutrition science, and strength and conditioning.

Her background was in business with an especially strong suit in operations and systems, and she’s a compelling writer and charismatic speaker. We were good at what the other had no experience with or background in. In terms of complementary abilities, we were an excellent team. Neither of us could have done it without the other.

Given my 9 years in clinical practice, I knew how to interpret the scientific research and how to develop a meaningful rapport with people and then communicate just the right amount of science-y “why” (in simplified, accessible language) in order to mobilize patients and readers. My Whole30 cofounder was an experienced public speaker with excellent communication skills who easily absorbed and communicated information, and was adept at engaging with people in a way that inspired them to make positive change. Simply put, there was a unique combination of skills and personalities.

In 2006, I randomly came upon Dr. Loren Cordain’s research on molecular mimicry and autoimmunity, which led me to the Paleo movement and ultimately to my friend, Robb Wolf, who was highly supportive of my work and gave me a professional nudge forward. The modern Paleo movement was pretty young then, and we arrived at the right-time-right-place with our clear and simple message, which was well-received by the audience that we presented seminars to in 30-something US states and a half a dozen countries. At the time, I was directly involved in the CrossFit community and got a lot of support from local gyms and the online community alike, and our reputation and rational, moderate message spread rapidly in that community.

Again, right-time-right-place and very fertile ground for the message.

The Whole30, I’m proud to say, is an incredibly effective program, and the grassroots movement that sprung up beneath and around it ultimately made it what it is today. The passionate support that we received from the community meant that the (totally free) program was shared and reshared and reshared without any brilliant, cohesive marketing campaign from us. People other than us made it what it is today. It self-seeded, germinated, reseeded itself, and has matured into an incredible, thriving community that I’m proud of beyond words.
There are probably lots of other factors, too, but you get the point: this is not an easily replicable situation.

If I were to charge someone money to teach them how to be a successful health entrepreneur based on my experience, I’d be taking money from them that I had no right to take. Yes, I’ve learned a great deal about human physiology and pathology, functional medicine, social psychology, nutrition science, and behaviour change during and since grad school that I applied in building the Whole30 and now in creating the new More Social Less Media program, but if I’m honest with myself – and with you – I can’t tell you how to do what I’ve done all over again.

Shoot, given that I’m no longer directing the Whole30 program and am starting over as a solo entrepreneur, I’m not even sure that I can successfully create another massive, world-changing movement comparable to what I’ve already done, but I’m sure as hell going to try.

Yes, I’ve learned a great deal about human physiology and pathology, functional medicine, social psychology, nutrition science, and behaviour change during and since grad school that I applied in building the Whole30 and now in creating the new More Social Less Media program, but if I’m honest with myself – and with you – I can’t tell you how to do what I’ve done all over again.

It’s way more pleasant, of course, to tell myself that I am the reason (or co-reason) that the The Whole30 is currently the tenth bestselling book on Amazon – of all books! (I’m stunned and humbled and a little bit baffled.) Alas, I know taking credit for all that would require a considerable lie to myself, and I’m pretty bad at lying to myself these days. It feels so false and hollow, and the nasty cognitive dissonance it causes me isn’t worth the reward of the self-flattery. Incredible things have happened, and it’s not because I outlined a squeaky-clean month of eating back in 2009.

Not only can I not tell you how to recreate my success, but I also can’t give you advice on the internet whether you should add butter to your coffee or do CrossFit or do intermittent fasting or any other trendy thing. As always, context matters, and anyone who tells you that intermittent fasting or a ketogenic diet is the “best strategy for fat loss” is grossly overstating their case and clearly does not understand that context always matters.

Gurus like to be looked to as people who have it all figured out already, but that’s invariably a lovely (and profitable) story that isn’t quite true.

That was a really long way to get around to the idea that I am not a guru.

People that come to me for simple answers to their complex questions are invariably disappointed when my response to their query is, “I don’t know, it depends”, or my more classic response, “Context matters.” In my personal commitment to intellectual integrity, I can rarely say with certainty that “Here, I have the answer for you.” What I usually end up saying is, “Based on my learning and experience, here’s my best guess, but I’m still figuring lots of stuff out, too.”

In my personal commitment to intellectual integrity, I can rarely say with certainty that “Here, I have the answer for you.”

I wrote an essay years ago that made the point that both consumers and the producers of cheap, industrially-produced animal products were to blame for the construction and perpetuation of the factory farming system. It takes a party willing to look away from the truth (or accept a shortcut or convenient half-truth) and a second party willing to give the first party what they want: a simple (albeit false) solution, a sensationalised product, the promise of a shortcut.

Everyone wants the know how to hack the system. In the fitness/wellness industry, there are a wealth of both of buyers and sellers of false promises. There are tens of thousands of people willing to throw down hundreds or thousands of dollars a year for trainers, nutrition plans, exercise videos, advice books, fat-burning supplements, and the newest-and-greatest fitness equipment, hoping that this will finally be the answer.

In the fitness/wellness industry, there are a wealth of both of buyers and sellers of false promises.

There are just as many people willing to put themselves out there as experts, as knowledgeable and experienced professionals, and as self-styled gurus showing off their arms/abs/hair as evidence that you, too, can finally be happy by achieving what they have achieved and by following their advice, payable in 4 easy payments of $29.95.

Self-proclaimed leaders fool consumers (and themselves) into thinking that they have it all sorted out, and the pilgrims are more than willing to worship the guru and to pay money to hope that it’s true.

Neither party is more or less guilty than the other. If no one wanted shortcuts and easy fixes and abzzz, the Gurus wouldn’t have thousands of followers. If the Gurus weren’t doing mental gymnastics to convince themselves that they, in fact, do have The Answer for people and that they should offer (sell) it to their followers (whether they were being knowingly dishonest or not), there wouldn’t be any smarmy “experts” to steer clear of.

To clarify, I do think that my work has real, tangible value, and I’m fiercely dedicated to researching and translating current Science into English for anyone interested in simple, sane, unsensationalised lifestyle suggestions. Whether or not my opinions jive with you and my suggestions integrate well with your personal context… well, we’re just going to have to find out.

I just want you to know that I’m figuring out this thing called Life, too, and I hope we can learn from each other.

You help me with my Rubik’s cube, and I’ll help you with yours.

* [In nature, delicious and nutritious go together for a very specific reason: delicious is nature’s way of telling us that a food is nutritious and good for our survival. It’s not coincidence.]